Pragmatic Play, leading content provider to the gaming industry, announces its partnership with Big Time Gaming for the popular trademark, Megaways™. The two software providers will collaborate for a sequel to the high-paying title and an all-time fan-favorite, Great Rhino™. 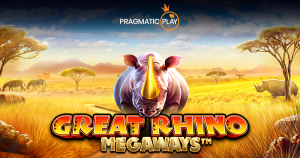 Inspired by the African Savannah, Great Rhino™ was initially launched in May 2018 and has consistently remained a top performer in Pragmatic’s portfolio. The original slot is filled with popular features, including the highly lucrative “Super Respin” one.

Melissa Summerfield, Chief Commercial Officer at Pragmatic Play, says: “Great Rhino™ is one of our most appreciated video slots, so revamping it with Megaways™ is a step towards gaining more ground in the current video slot market.”

“Rethinking one of our top-performing games will push it forward to a wider audience. We’re eager to see how the video slot evolves after launching the sequel.”

Nik Robinson, CEO of Big Time Gaming said: “We are really excited for the launch of Great Rhino Megaways™. It brings attitude and excitement and we love how the mechanic has been used to create a standout slot. I’m very confident this will be a huge success and players are going to love it.”

Great Rhino™ Megaways™ will be a valuable addition to Pragmatic Play’s already popular video slot portfolio, gathering more than 100 HTML5 games, with four new ones launched every month. The supplier offers Slots, Live Casino, Bingo and more, all via one single API.

Yes, I am 18 years or older No, take me back
We use cookies on our website to give you the most relevant experience by remembering your preferences and repeat visits. By clicking “Accept All”, you consent to the use of ALL the cookies. However, you may visit "Cookie Settings" to provide a controlled consent.
Cookie SettingsAccept All
Manage consent

This website uses cookies to improve your experience while you navigate through the website. Out of these, the cookies that are categorized as necessary are stored on your browser as they are essential for the working of basic functionalities of the website. We also use third-party cookies that help us analyze and understand how you use this website. These cookies will be stored in your browser only with your consent. You also have the option to opt-out of these cookies. But opting out of some of these cookies may affect your browsing experience.
Necessary Always Enabled
Necessary cookies are absolutely essential for the website to function properly. These cookies ensure basic functionalities and security features of the website, anonymously.
Analytics
Analytical cookies are used to understand how visitors interact with the website. These cookies help provide information on metrics the number of visitors, bounce rate, traffic source, etc.
Advertisement
Advertisement cookies are used to provide visitors with relevant ads and marketing campaigns. These cookies track visitors across websites and collect information to provide customized ads.
Functional
Functional cookies help to perform certain functionalities like sharing the content of the website on social media platforms, collect feedbacks, and other third-party features.
Save & Accept