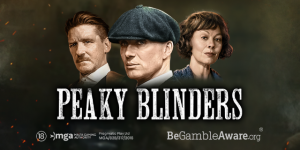 The 3×5 slot takes players to the heart of Small Heath, home to the notorious Peaky Blinders from the hit show, where they will experience the red right hand of the Shelby family.

Packed with both features and modifiers, players will look to reach the “By Order Of The Peaky Blinders” or the “Shelby Betting Shop” modifiers to shoot for big wins, either of which can land on any spin.

With the “By Order Of The Peaky Blinders” modifier, all Character and Wild symbols remain sticky on the reels, before activating a Respin. They will then transform into a singular random character, triggering huge payouts.

The Shelby Betting Shop bonus can also land on any spin, giving cash values for all Character symbols which land, before accumulating the total for big wins.

Both Free Spins modes are triggered when the Peaky Blinders Bonus symbol lands on reels one and three, before either of the modifier symbols lands on the fifth reel. The modifier will determine which Free Spins mode the player gets, with the modified features lasting for the entirety of the Bonus Round.

Melissa Summerfield, Chief Commercial Officer at Pragmatic Play, said: “Peaky Blinders marks our first branded title, in partnership with Endemol Shine, and we are proud to release a game based on such an iconic series.

“It has been very exciting developing content around such an established TV franchise, and we look forward to seeing how it is received by our fans across the globe. This is not one to miss!”

Pragmatic Play currently delivers up to four new slot titles a month, as well as an extensive range of Live Casino and Bingo products through its multi-vertical offering. The company’s entire portfolio is available through a single API integration.

Yes, I am 18 years or older No, take me back
We use cookies on our website to give you the most relevant experience by remembering your preferences and repeat visits. By clicking “Accept All”, you consent to the use of ALL the cookies. However, you may visit "Cookie Settings" to provide a controlled consent.
Cookie SettingsAccept All
Manage consent

This website uses cookies to improve your experience while you navigate through the website. Out of these, the cookies that are categorized as necessary are stored on your browser as they are essential for the working of basic functionalities of the website. We also use third-party cookies that help us analyze and understand how you use this website. These cookies will be stored in your browser only with your consent. You also have the option to opt-out of these cookies. But opting out of some of these cookies may affect your browsing experience.
Necessary Always Enabled
Necessary cookies are absolutely essential for the website to function properly. These cookies ensure basic functionalities and security features of the website, anonymously.
Analytics
Analytical cookies are used to understand how visitors interact with the website. These cookies help provide information on metrics the number of visitors, bounce rate, traffic source, etc.
Advertisement
Advertisement cookies are used to provide visitors with relevant ads and marketing campaigns. These cookies track visitors across websites and collect information to provide customized ads.
Functional
Functional cookies help to perform certain functionalities like sharing the content of the website on social media platforms, collect feedbacks, and other third-party features.
Save & Accept